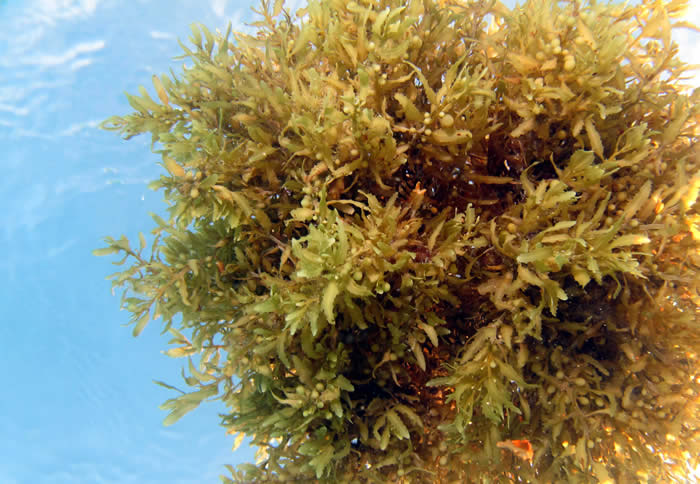 It may seem like the only bodies of water affected by overgrown aquatic plants and weeds are ponds, lakes, streams, and rivers. However, oceans and shores can be affected by too much plant life as well. Sargassum, a brown, flexible type of macro-algae (or seaweed) can affect shallow water, coral reefs, and the beaches and shores of oceans. Historically, it has been used in traditional Chinese medicine, is used as a source of iodine used to treat thyroid disorder, used as a diuretic, and is a great fertilizer.

Sargassum is a floating algae which typically comes in mats that provides a habitat and food for many types of marine species such as sea turtles, fish, marine mammals, and even birds. From an ecological standpoint, sargassum in normal amounts is great for marine creatures. Sea turtles love sargassum; they eat it and use it for nesting their eggs, though large decaying piles of it can prevent proper nesting as well as ensnare hatching turtles. Besides sea turtles, the floating sargassum is popular among crabs, shrimp, mahi mahi, and jacks who all use it for breeding grounds and refuge. Pelicans and seabirds enjoy this seaweed as food, and it even nourishes deep sea creatures. Berry-like oxygen-filled structures (pneumatocysts) found in this algae cause it to float, but when it loses buoyancy and sinks it provides carbon for energy and food for fish and other invertebrates that dwell in the depths of the ocean.

In small quantities, sargassum that is driven onto shores by the wind and waves can add nutrients to beaches and build or strengthen land-protecting, storm-barrier dunes. Acting as a buffer, it prevents erosion of shores and beaches and is also used as fertilizer to nourish worn beaches. The end result of these good qualities of sargassum is healthy habitats, ecosystems, and beaches, which attracts happy tourists and supports marine life. However, this thick, tangled plant isn’t always the best for its ecosystem in some cases.

Sargassum can seem relatively harmless, but it plays a big part in ecological crisis’s on beaches and even in the Caribbean Sea, where large amounts of varied species of the algae is accumulating along the shores. With the Caribbean Sea crisis, regions and islands of Mexico, the Dominican Republic, Barbados, and Tobago are heavily affected as sargassum washes ashore, piles up, and then decays, emitting a strong and foul odor. This creates negative effects on not only the surrounding ecosystem but also tourism, which many islands and countries heavily depend upon. The sargassum is so pungent and unsightly that many tourists cancel trips and hotel stays nearby invaded beaches, resulting in lost money. Some causes of the Caribbean Sea crisis may include rising sea temperatures, sea current changes, and also nutrients and wastewater runoff from cities and agricultural fertilizers. Scientists and researchers are searching for a solution, though the amount of sargassum is overwhelming and it’s costly to clean up; Mexico spent millions and hired thousands of people to begin clean up of their beaches in 2015. Though sargassum has been around for centuries, its recent invasions are thought to be in incredibly large numbers, making control and clean-up difficult and expensive.

Similarly to the Caribbean Sea crisis, sargassum poses a threat to other shores surrounding the Gulf of Mexico, North Atlantic, and even European locations as it’s washing up in increasing amounts, even by the ton some years, causing harm to marine life as well as making for an eye-sore that drives away tourists.  Fishermen struggle with sargassum because it’s difficult to fish within the seaweed’s thickness, and heavy accumulation on the water’s surface can harm coral reefs and the beach.

Some smaller efforts to clean up sargassum are made, including methods such as stretching mesh nets over near-shore floating sargassum and scooping it out of the waters. The seaweed is then returned to further out ocean currents where it won’t wash up on the beaches. Though there is some concern with disturbing marine life and it’s not a completely effective method (especially with large quantities) it does prevent sargassum from invading hotel’s beach-front properties. Many beaches also implement the use of heavy machinery to clean away sargassum on a daily basis, while others hand-clear the seaweed. It’s typically then taken away and used for compost or fertilizer.

Current climate changes or other environmental factors may play a part in the increase of sargassum invading beaches around the world, but no matter the source, it’s evident that the seaweed poses problems that can affect different country’s economy, their citizens and tourists, and the animal and marine life that reside there. Sargassum has some benefits but can become out of control in some locations. Although clean up can take effort and money, it’s still possible to clean up beaches and shores in order to keep tourists happy and the creatures that share the land to also have good living conditions.

Berger, S. (2015, October 10). What is Sargassum? Smelly Seaweed Invasion Declared An Emergency in the Caribbean. Retrieved March 18, 2016, from http://www.ibtimes.com/what-sargassum-smelly-seaweed-invasion-declared-emergecny-caribbean-2046197

Gregory, P. (2015, April 7). What You Need to Know about Sargassum Invading the Caribbean. Retrieved March 18, 2016, from https://www.linkedin.com/pulse/what-you-need-know-sargassum-invading-caribbean-sargeant-gsm-hst